It’s hard to believe that we’ve already been here for 15 years! We’re excited to reach this milestone, that’s why we’re taking an entire week to celebrate. It’s all leading up to the big night… Country Night!

So, pull on your boots and come on over with your family and friends to enjoy live Country music and one of our renowned BBQ Buffets.

See what other events we have going on to celebrate 15 years: 15th Anniversary Celebration

The talented Tina Michelle & the Rhinestone Cowboys deliver a high-energy musical experience blending modern country and classic rock & roll. Come on out and kick up some dust with Tina & the boys!

See the entire menu below. 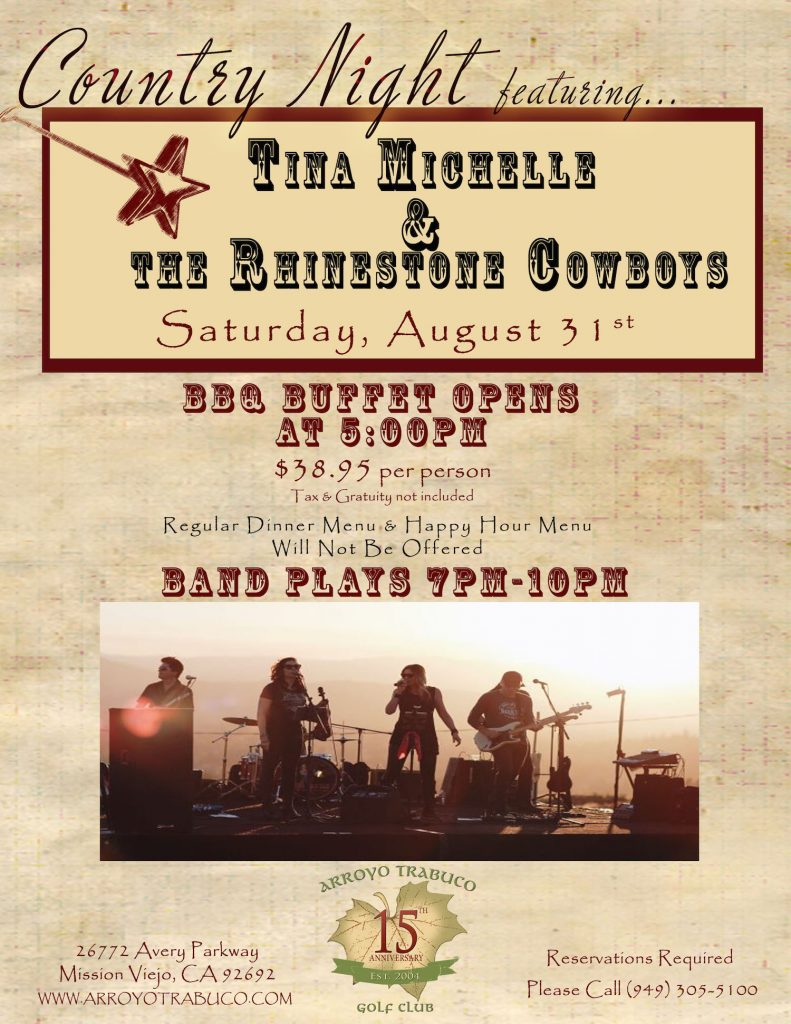 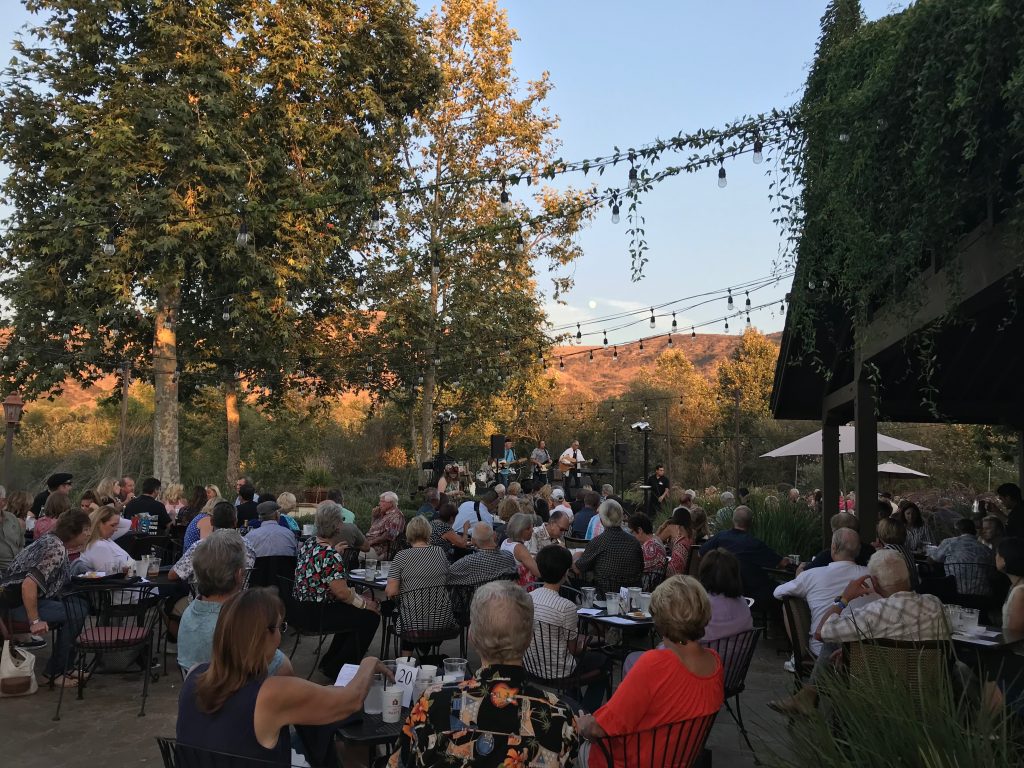 It’s starting to feel like summer out there, and that’s because Summer is nearly here. How will your kids spend their summer? We’ve got some suggestions for you. Check out these Junior Summer Camps at Arroyo Trabuco Golf Club.

Camps are designed for all ability levels and will cover all aspects of the game from putting, chipping, pitching, full swing, course management, rules and etiquette, and golf fitness. We have created the best practices for allowing any level of golfer to excel to the next level in a fun and safe environment. Our goal is to make each kid love the game of golf!

Price for the week includes: Range balls, Loaner Golf Clubs (if needed), Prizes, and a whole lot of fun on the golf course! 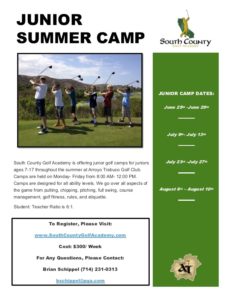 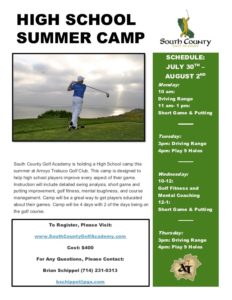 Register and secure your spot, because spots fill up quickly
http://www.southcountygolfacademy.com/register-ages-7-17

For more information or questions visit our website, www.SouthCountyGolfAcademy.com

Join Seiko and Aki Matsumura with Matsumura Golf at Arroyo Trabuco Golf Club for a fun and engaging summer youth golf program with a flexible schedule.

Want to get your child into golf classes this summer but busy with vacations and family in town? Have your junior come to one class or multiple classes for the months of June and July/August. Studies show that frequent repetition that is spaced out is the most efficient way to learn and is better for long-term retention.

Students of this program will:

These summer classes also transition into our fall program.

The golf world entered last year’s Masters buzzing about the looming rise of a youthful Big Four. A year later, there’s mostly only talk of an emerging Big One – and it isn’t that guy.

DJ, not TW, is turning into the Tour Goliath that his tremendous talent suggested possible but hadn’t been realized. His breakthrough win at the 2016 U.S. Open appears to have changed all that.

After being named Player of the Year in 2016, DJ has only built on that momentum by rising to world No. 1 and flattening the field on the way to three straight victories coming into Augusta. But a back injury has taken him out of the running at the last minute.

Will DJ continue his Tour dominance with a win at Augusta National, a place where he doesn’t have a great track record? Or will players with a better history and feel for the place (Spieth, Mickelson, etc.) stem the tide and deny him the green jacket?

The question: Can DJ’s greatly improved short game and putting stand up to the staunch test at Augusta?

Does that open the door for a new face or will a former winner rise from the ashes to reclaim the title?

We ponder that and four other storylines coming into what many regard as the best week in golf and follow it up with a prediction from our head golf professional, Michael Block. Here’s a look at our top five.

Here’s a look at our top five. 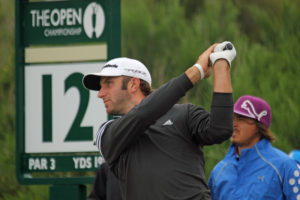 DJ, will he continue to dominate is Out – His nearly unrivaled length has always made him a fearsome force on the Tour, but it’s his newfound touch on and around the greens that has changed his game and has him lifting more trophies. Unfortunately, a back injury sustained from a simple slip down a few stairs has him out of the running for a green jacket this year.

DJ finished a very quiet T-4 last year, which is his best finish at Augusta, previously T-6 in 2015. If he’s stealthily been stalking the jacket, then the new DJ might be ready.

The Golf Channel shared a story about all the work Johnson has put in honing his game inside the scoring zone (125 yards and in) in the past year, and his second major and a fourth straight victory will likely be riding on it. But most critical, will his recently steady putting touch stand up to the test of the slick Augusta greens? Guess we’ll have to wait until next year. 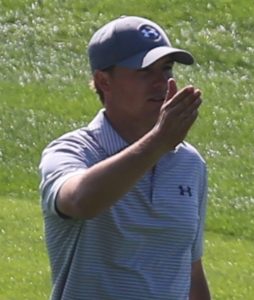 Will Jordan rebound? – We would likely be talking about a two-time defending champion going for a third straight green jacket had Jordan Spieth not gotten two consecutive tee shots wet on the par-3 12th a year ago. That turned what looked to be a runaway into an open door for underdog Danny Willett to sneak in and claim the championship.

Spieth claims not to be haunted by No. 12. He returned to Augusta last Dec. and played the hole without issue. Still, you can be sure the replays of his meltdown will roll when Jordan steps to the 12 tee on Thursday.

Spieth seemed to burn out a bit a year ago after playing a hectic schedule. He’s dialed that back this year and seems to have rediscovered much of the form that had him chasing the Grand Slam two years ago.

We know Spieth can putt the notorious greens of Augusta, but will his ball striking hold up under what are expected to be challenging conditions on Thurs. and Fri.? But if Spieth gets into the weekend around the lead, it’ll be hard not like his chances. With a T2, 1, T2 history at Augusta, would you bet against him?

He’ll certainly be seeking redemption on No. 12 and savoring another chance to win back the green jacket.

Is Rory ready? – The Masters is the only gap in Rory’s major resume. Is this the year? He seems to have found his form again after being briefly sidelined with a rib injury.

As one of the few on Tour who can challenge DJ off the tee, that’d be a power pairing if it happened on the weekend. Is Rory ready to end his major drought? It’d certainly put some juice into the Augusta gallery if he’s contending going into Sunday.

Can Lefty be right one more time? – Though he’s played some of the most consistent golf of his career and been around the lead often (see the British last year), Phil hasn’t won since he won the British in 2013. Can he pull out one more major surprise with that famous Augusta-friendly short game?

If he’s steady off the tee, the decider for Phil will likely be that claw putting grip he remains committed to. Can he roll it for four rounds again like he did at the British last year? If so, look out for Lefty.

Will it be a favorite or will it be someone like Willett? – More than the course, the weather may be the wildcard to answering this question.

With windy and potential wet weather on tap for the first two days, it could open the door for underdogs to secure some precious landscape near the top of the weekend leaderboard.

The forecasted cool conditions are being likened to 2007, when Zach Johnson used some clutch and calculated wedge play to surgically conquer Augusta National and the field. Will a similar approach prevail this year?

The Tour saw four first-timers claim all the majors a year ago. Will that trend continue or will a favorite emerge victorious? We’ll soon find out during one of the best weeks in golf.

Go to our Facebook page to view Michael’s predictions for the week as well as a few other video takes on the Masters, including Michael’s own personal experience attending in 2007. Happy Masters week!

With wonderful weather throughout the year Orange County, California, has a history full of sunshine. The mild weather helped create a booming agricultural economy while also contributing to Orange County being a popular destination. For over 100 years Orange County has been famous for its tourism. Visitors are attracted by weather, beaches, Disneyland, Knotts Berry Farm, resorts, shopping, and golf.

Golf was originally brought to the area back in 1899. A group of sportsman introduced the game at Peters Canyon with a crude nine-hole course on sand and soil. Golf course architects found the area appealing for their designs. Landscapes of beaches and groves provided inspiration to many including Tom Fazio, William Bell, Ted Robinson, and Casey O’Callaghan. In fact, Casey O’Callaghan designed Arroyo Trabuco Golf Course with PGA Tour professional Tom Lehman. 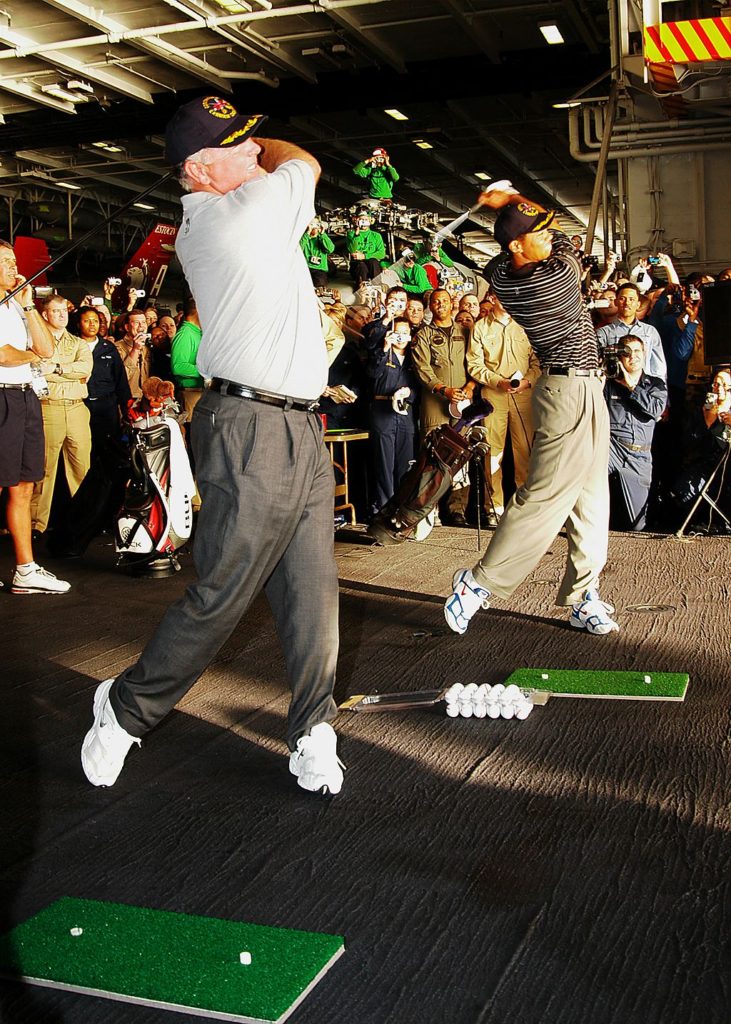 Mark O’Meara and Tiger Woods on the USS George Washington

With great golf courses in the area the sport flourished. Two notable golfers from the area, are friends: World Golf Hall of Famer Mark O’Meara and the legendary Tiger Woods. In 1998, Mark O’Meara made golf history by winning both the Masters and the British Open. O’Meara still plays in the Champions Tour. Tiger Woods has broken numerous golf records, most notably he: was named PGA Player of the Year a record 11 times, won 14 professional major golf championships, and was the youngest player ever to achieve the career Grand Slam – which he has done 3 times. Even with recent struggles with his game Tiger Woods is considered by many to be the best golfer who ever lived.

With the terrific weather and rich golf history Arroyo Trabuco is proud to contribute to the great tradition of golf in Orange County. Built in 2004 by famed golf course architect Casey O’Callaghan and golf great Tom Lehman, Arroyo Trabuco was set up for the enjoyment of golfers at all skill levels. The 18-hole championship-length golf course has been providing locals and visitors alike with unforgettable golf experiences.

Get in on Orange County Golf History. Book your round at Arroyo Trabuco Golf Club: 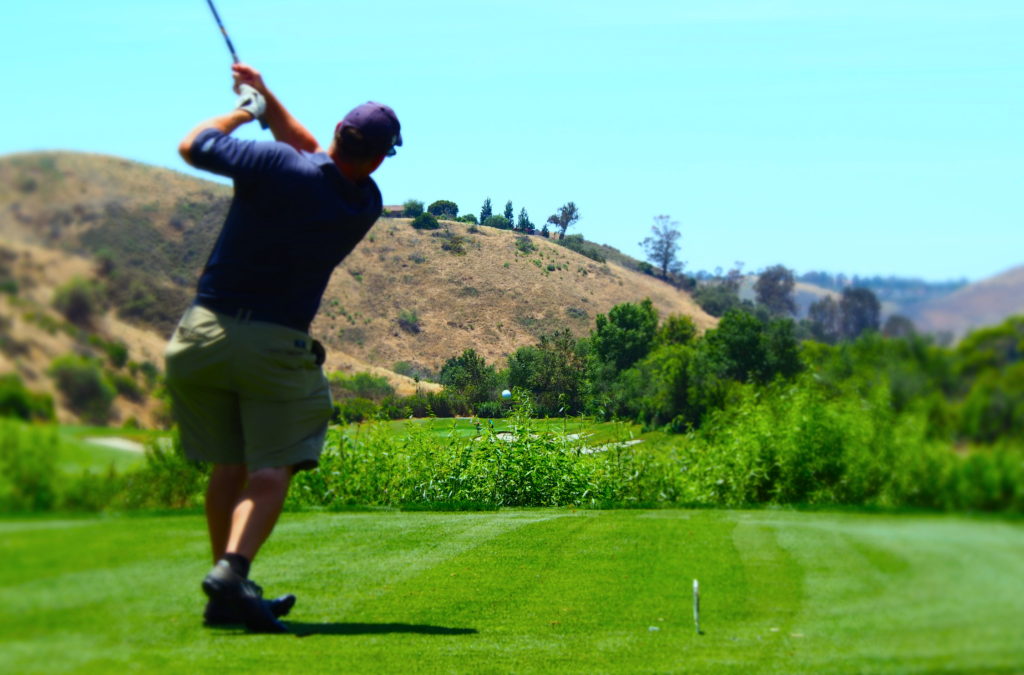 Join us this Saturday on our beautiful Fireside Lawn for a special viewing of the award-winning family-friendly movie Inside Out.

Selected as one of the Top 10 Films of the Year by the American Film Institute, the Academy Award winner for Best Animated Feature and nominee for Best Original Screenplay, this lauded film is guaranteed to delight and entertain both children and adults.

The Disney Pixar film takes you on a journey from the Inside Out to discover the emotional roller coaster inside your head. Sincere, funny, charming and full of whimsy this movie is also fast-moving and packed with surprises.

Movies Under the Stars

Inside Out – Saturday, September 10

Bring some chairs and settle in on our Fireside Lawn for snacks, fun, and entertainment under the stars. 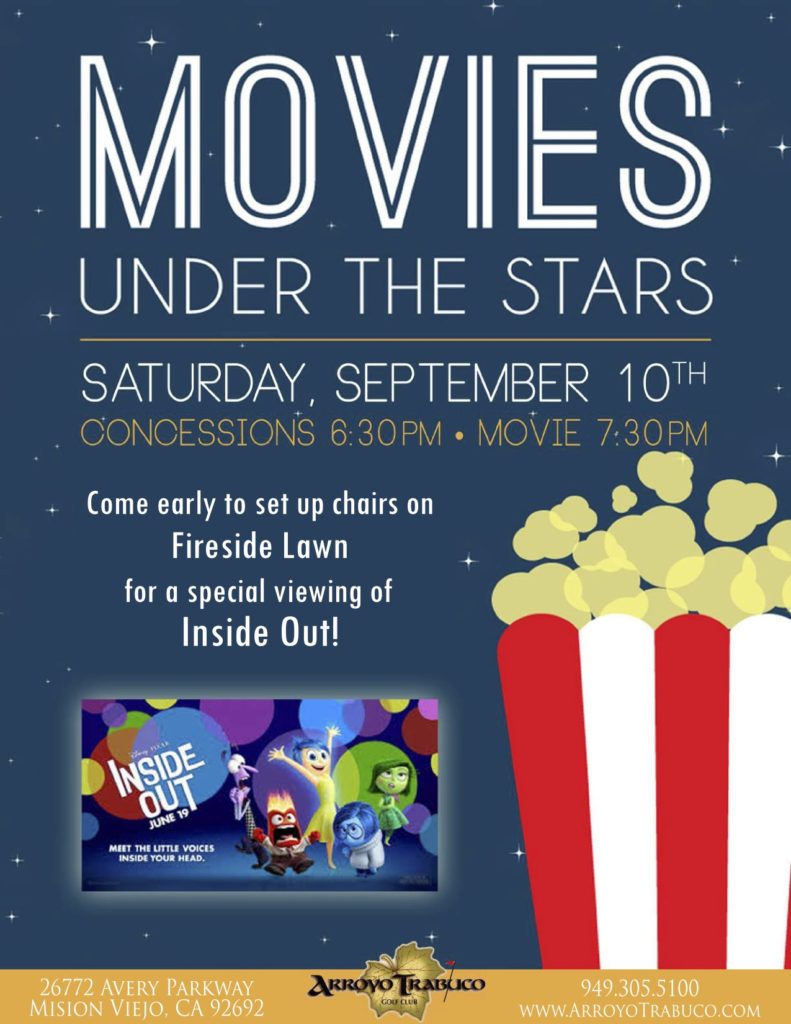 We hope to use this blog to keep all of our website visitors informed on what’s happening at Arroyo Trabuco Golf Club. Here you will find out about special events, news and interesting stories about Arroyo Trabuco. Please check it out.

If there’s anything you’d like to see show up on the blog. Please let us know!