Here at Arroyo Trabuco we are eagerly awaiting the British Open.

As the pros travel overseas to Royal Birkdale for the year’s third major, the name of the championship seems particularly fitting – The Open.

In a year lacking a dominate player, parity has become the norm on a wide-open Tour. That’s best illustrated by the majors, where we’ve now seen eight straight first-time major champions after Brooks Koepka won the U.S. Open.

Will a former champion step forward to claim the Claret Jug or will first-timers continue to break through? And if so, who? Rickie Fowler? John Rahm? Tommy Fleetwood? Hideki Matsuyama?

Last year, it was Henrik Stenson’s turn after an epic duel with Phil Mickelson, who opened the tournament with a 63 and lost to Stenson’s 63 on Sunday. Conditions don’t seem so conducive for scoring this year. Blustery weather is in the forecast.

Who will weather the weather and the unique tests of links golf? We’ll start to find out on Thurs. Here’s a look at the top storylines going into the week.

Rookies rule right now when it comes to major championships. But rather than celebrate the depth of the Tour, the media has instead clamored for someone to seize the season.

A year ago, Dustin Johnson began a run of dominance after a win at the U.S. Open that led to him being named Player of the Year. If you had to vote right now, who’d it be? Rookie John Rahm? He’s one of the few to have multiple victories and consistent strong showings on Tour. Otherwise, many of the Tour’s best have either been hampered by injuries or inconsistency.

Stenson is among those having a ho-hum season. If he can get his game together, he has a chance to be the first repeat Open champion since Padraig Harrington in 2008-09.

Mickelson stunned the golf world after the U.S. Open (he didn’t play because of his daughter’s graduation) when he announced the end of his relationship with long-time caddy Jim “Bones” MacKay, who was on the bag when Phil won his last major at the British in 2013.

This time, Mickelson’s brother Tim will be on the bag and MacKay will be in the booth working for the Golf Channel. Having listened to MacKay on a few Callaway Golf podcasts, I for one am excited to hear his unique take on the game and insights from 25 years of touring with Mickelson. (What’s the over/under on Phil stories told during the tournament?)

Will the change help Mickelson rediscover his winning ways? He hasn’t won any Tour event since that victory in 2013, even though he’s played some of the most consistent golf of his career.

After skipping the U.S. Open, will Mickelson be rested or rusty? He’s professed a new-found love of links golf. Will it love him back again this week?

Can Rickie Shake His Case Of The Sundays?

Fowler was in contention on Sunday at the Masters and the U.S. Open – and never made a charge. Similarly, he failed to make a move Sunday at the Scottish Open.

A few analysts criticized Fowler for overly conservative play on Sunday at the U.S. Open. Will he find the formula to finally contend and close at Royal Birkdale?

At just age 28, Fowler finds himself carrying the mantle of best player to have never won a major. Will he change that at the Open or carry the title onto the PGA Championship and maybe into 2018? Sunday will be the key if Fowler contends again. Will he muster the effort to finally conquer a major?

It hardly seems like an Open without a spot of weather. This year, the forecast is dry but high winds are predicted.

Will that forecast favor the Europeans, who are used to these conditions, or possible a Texan (Jordan Spieth?) also accustomed to playing in the wind?

Given the usual penchant for parity that comes with the bounces and breaks of links golf, a windy forecast makes a wildcard winner seem an even more likely outcome.

Playing on home soil, Johnston is likely to have a sizeable and vocal gallery this week. That actually seems the only safe prediction coming into a week where the Tour and trophy are there for the taking if someone can rise to the occasion like Stenson did a year ago. As always, it’ll be great fun to watch it all start to unfold across the pond on Thurs.

Come on by and catch some of the Open at O’Neill’s Bar and Grill with fellow golf fans. And since golf is more fun to watch after you’ve played a round you should probably…

The South County Club Academy and Arroyo Trabuco are excited to host the Hurricane Junior Golf Tour, the nation’s largest junior golf tour, in August. Click the button below to sign up your junior now for this exclusive event on Aug. 15-16.

The tour is celebrating its 10th anniversary this year. It was founded in 2007 “with the intention of providing junior golfers between the ages of 8-18 an opportunity to play exceptional courses in a competitive environment. The tour’s vision is to provide superb hospitality and make every event a memorable one,” according to www.hjgt.org.

The event at Arroyo will feature stroke play and team competitions. See the flyer for tournament details.

This is the first time the tour has come to Arroyo Trabuco and South County Golf Academy Director of Instruction Brian Schippel said it’s a unique opportunity for local juniors.

“We are honored to be partnered with this tour as it makes its way to the West Coast,” he said. “We are impressed with their ability to run professional, and college-type events, and are excited to bring that to our students. 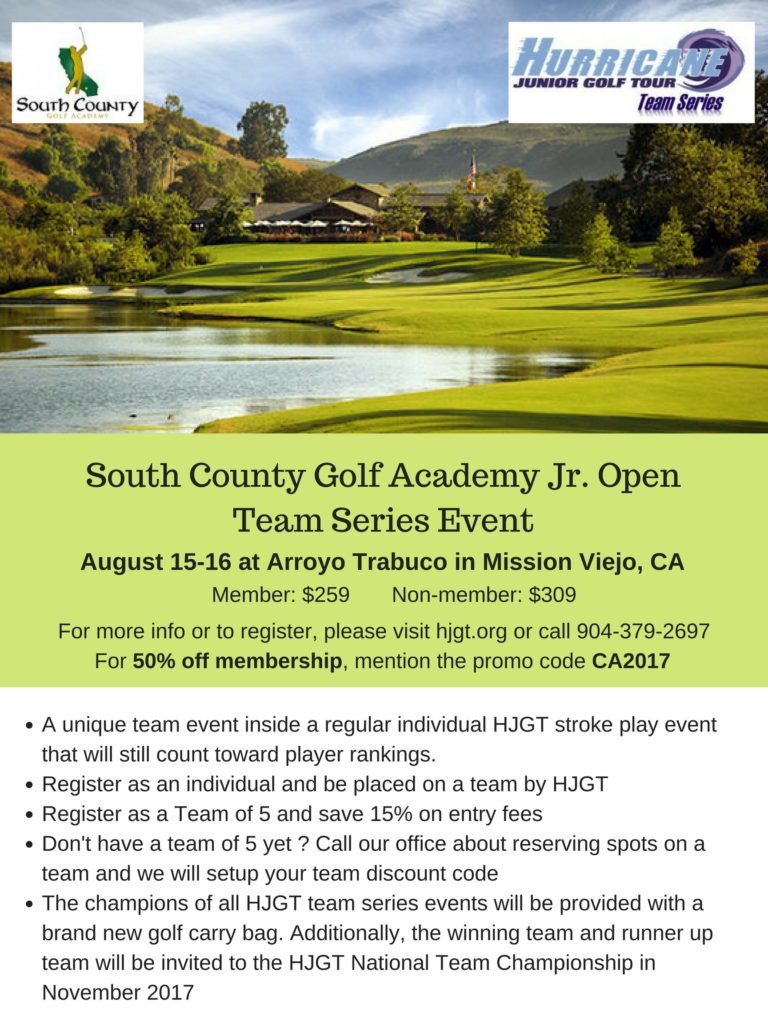 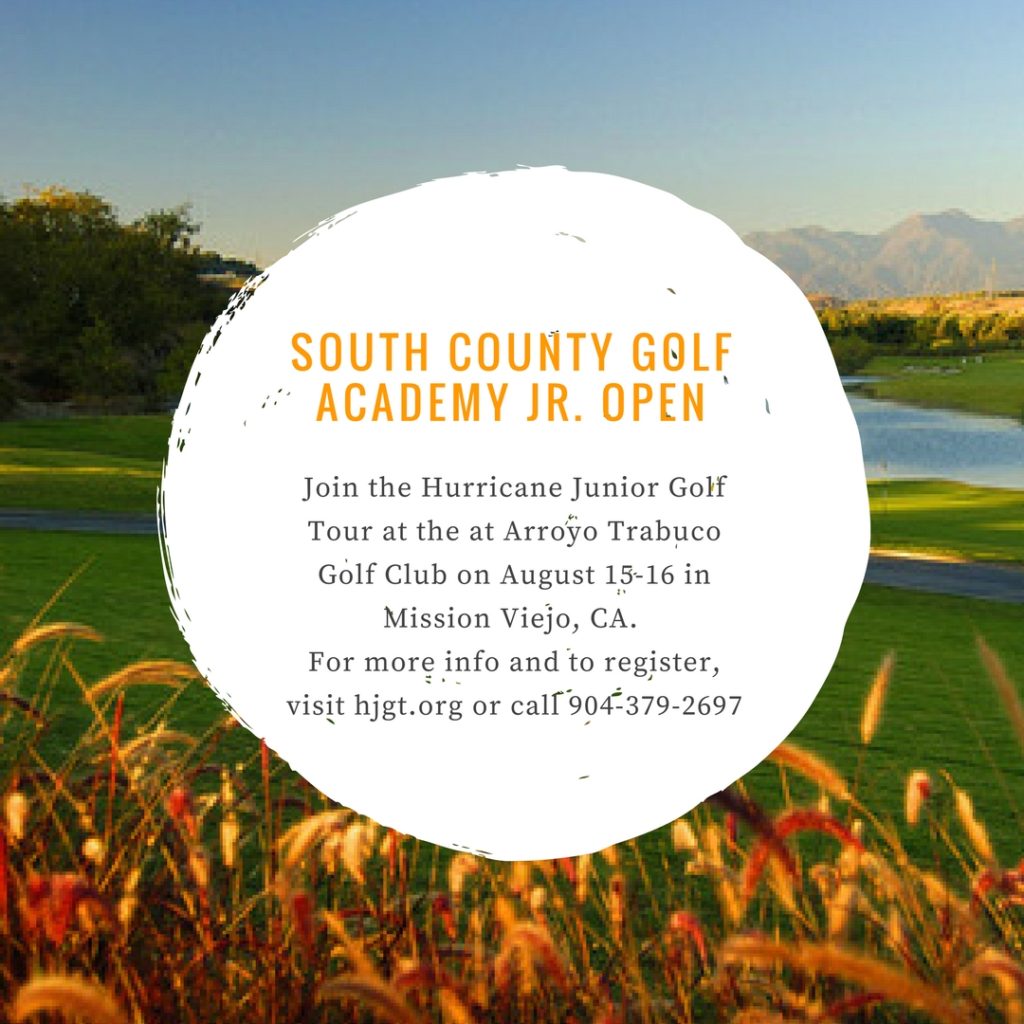 Like Chambers Bay in 2015, Erin Hills is a first-time U.S. Open venue and a relative unknown to the pros as it has little tournament history. It hosted a U.S. Amateur in 2011 as a preparation for the Open.

The heavily bunkered, tree-less course, which opened in 2006, by description sounds comparable to Oakmont, last year’s U.S. Open venue, where Dustin Johnson’s length and short-game prowess powered him to a break through major championship.

That win catapulted Johnson to the most dominant stretch of his career and the world No. 1 ranking. That momentum was stalled at the Masters after a freak fall caused him to withdraw with a back injury. Can he return to form on a course that will play to his strengths – namely length? Or will another big bomber raise the trophy?

Today we start to find out. Here’s a look at the leading storylines heading into the first U.S. Open ever in the state of Wisconsin.

The knowns are these: the rough is thick and the course is long, because that’s what a traditional U.S. Open setup is. But practically everything else about the longest course in U.S. Open history (7,741 yards) remains a mystery.

The pros will be using their practice rounds to get used to the new layout and particularly its treacherous bunkers, of which there are three types, the nuances of its rolling terrain and the sight lines for a number of blind semi-blind approaches.

The course is such an unknown that ESPN golf analyst Andy North, a Wisconsin native, gave a 30-shot range for predicting the winning score.

Of note: the last major played in Wisconsin, the 2015 PGA at Whistling Straits, saw Jason Day post a major championship scoring record of 20-under.

Will someone solve Erin Hills and go on a similar birdie binge or will it be a week that sees a barrage of bogeys? We seem to have a true wildcard course on our hands, but there’s no such mystery about the favorite: It’s Dustin Johnson.

There hasn’t been repeat champion at the U.S Open since Curtis Strange defended in 1989. Will the 117th Open see Johnson snap that streak?

The fairways are reportedly twice as wide as the ones Johnson dominated at Oakmont a year ago, so the set-up is friendly to his prodigious length, but it’s his improved wedge and short game that has really been the game changer for his 2017 dominance.

Johnson, however, hasn’t seemed to have quite the same sharpness since returning to competition after the Masters. He missed the cut at his last event (the Memorial), but some analysts viewed that as a blessing in disguise because it allowed him to get a head start on his Open preparation.

We’ll soon see if that extra preparation pays off and Johnson can reclaim the dominating form he had going into the Masters, before which he had reeled off three straight victories.

If D.J. is right, are you betting against him? His putting has improved as well this year and he’s part of a Tour trend. 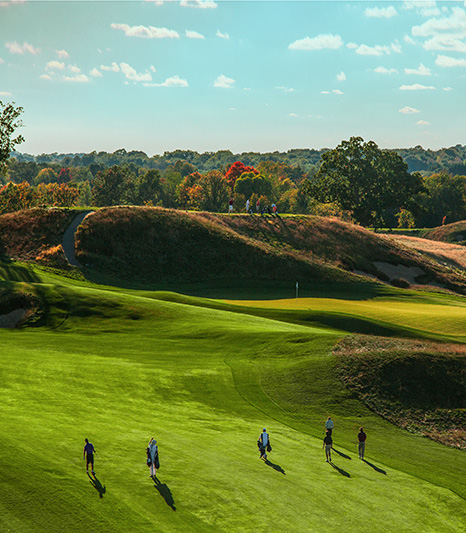 Rory McIlroy is the latest to add a mallet putter to his bag in a last-minute equipment change this week. The mallet is becoming the preferred style on Tour. Putting is always key, but a hot putter could really get on a roll this week due to the impeccable course conditions.

Erin Hills has been closed since October to ensure premium conditions for the Open, especially on the greens, which, unlike Chambers Bay, are yielding compliments from the pros. The pros who figure out the greens the fastest could gain an early edge. Martin Kaymer solved Pinehurst once by putting from off the greens. That option isn’t available this week, but steady putting will still be crucial.

Who will wield the magic wand that will lead to victory this week? Will it be a past major winner or a championship newcomer like it has been in the previous six majors?

Break On Through, Part 7?

Sergio Garcia’s win at the Masters pushed the streak of first-time major winners to six. Can another first-timer get hot and continue the streak? Rickie Fowler? John Rahm? Justin Thomas?

Understandably, the Tour’s top bombers dominate the list of favorites. Will one of them prevail if D.J. can’t recapture his A game? If bogeys abound, it could turn into a real scramble (think British Open) and the bounces could favor another first-timer.

But if U.S. Open experience prevails …

Before D.J., the previous three U.S. Open winners were Jordan Spieth, Martin Kaymer, Justin Rose. Rory McIlroy is also a past champion and the holder of the Open scoring record, 16-under in 2011.

Rose is on something akin to a major hot streak of his own. He finished runner-up to Garcia at Augusta and previously won the gold medal in the Rio Olympics playing under course conditions that sound a bit similar to what he’ll be facing this week at Erin Hills. GolfWeek actually has Rose listed as its No. 2 pick behind D.J. and ahead of Jason Day to raise the trophy this week (that’s a TaylorMade trio, by the way) and then rounds out its top five with Spieth and McIlroy.

Will one of the favorites prevail or will major-victory rookies resume their rise at the majors? We’ll start to get some clues when the major fun begins on Thurs.

Join us to watch the tournament unfold in O’Neill’s Bar and Grill. And, since you’re coming to Arroyo Trabuco anyways, might as well play a round of golf… 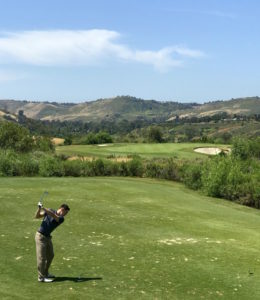